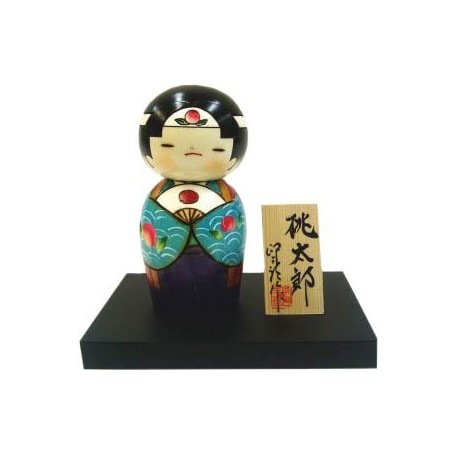 Made and hand painted in Gunma prefecture (Japan).

Momotarô is one of the most famous Japanese tales character.
In Japanese, Momo means peach, and Taro is a suffix often added to the eldest son names in the family.
The story goes like this: a long, long time ago an old man and his wife lived in a remote corner of Japan. They were poor and childless.
One day, they found a giant peach floating down a river. When they opened it to eat it, they found inside a child. He explained he has been send from heaven to become their child.
Later on, he left his parent to fight a band of demons on a remote island. He defeated them with the help of a talking dog, monkey, and pheasant (that's why Momotarô is often represented as a samurai warrior, like on this beautiful Japanese kokeshi doll).
He then returned home with the demons' treasure and the whole family lived comfortably.

30 other products in the same category:

Kokeshi doll - After the rain

Kokeshi doll - A refuge from the rain