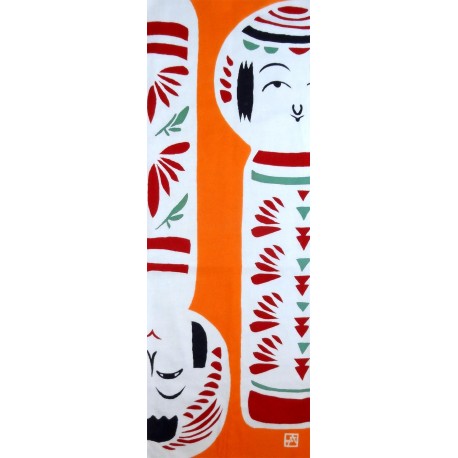 Notify me when available

Kokeshi dolls are traditional Japanese dolls made of wood.
It is said to have originated in the Tohoku region (Northeast Japan) where they were made by lathe-craftsmen. Around the middle of the Edo Period (1603 - 1867), settled down near the many spas (onsen) found in the Tohoku region, making wooden bowls and trays for sell to the visitors at the spas. They also start to make the Kokeshi dolls that people will bring back as gifts.

Dyed using the Sosogizome technique: also called Chûsen this is a traditional dyeing method originating from the Meiji era, where the dye is poured by hand over the cotton cloths. This allows to get the design permeating the fabric, so that it can be seen clearly on both sides.

A tenugui is a piece of dyed cotton cloth which has always been an essential tool for the Japanese. It was used as a wiping tool such as a towel or a handkerchief, or a headwear. It also came to be used in the place of a greeting card.
Recently people have found even more ways to use it, from place mats to tapestry for decorating their homes.

30 other products in the same category: